Everyone knows Flappy Bird! In case you do not, just take a look at the image here. 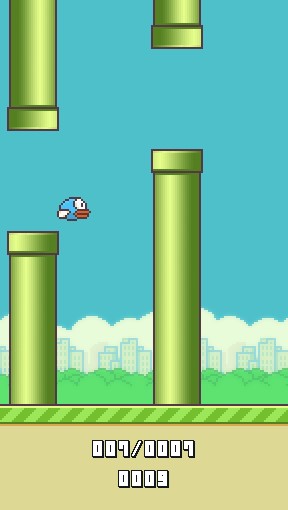 So, the bird flaps in a Mario-like world. But instead of entering or exiting the pipes, it should avoid them. All of them, including the ground, and the top limit of the screen. The problem, lies in the gravity. Without flapping, the bird go down vertically, while the pipes are always moving from the right side of the screen, to the left. A flap would make it go up, but not for long.

Commonly played in a touch screen device where a tap make the bird flaps, this time an action is regulated by a Reinforcement Learning (RL) mechanism, with two possible outpus: flap or no. The input states are composed by observing the screen along with an internal state of the bird's current vertical position.

For the RL algorithm, an instance of XCS-RC is used, can be downloaded using pip install xcs-rc or at github.

Reinforcement Learning is a way of collecting a set of knowledge through experience. An agent observes the environmental state, and then acts upon it. Then the decision is judged by a reward, denoting the action's appropriateness to the previously given state. The feedback closes an RL cycle, and the next one begins when an input state is received by the agent.
Initialization

Thanks to the Flappy Bird game maintained by pygame, we can focus on the learning part without too much effort in managing the design. As usual, the very first step is getting the environmental states. At first, we will do that using a built-in getGameState() function, since it is the easiest way. But then, some non-learning image processing stuff will be added to get more fun. 😉

This earliest step requires at least two parts: initializing the game environment (FlappyBird) and the learning agent. Below are the codes for the former.

A successful initialization is indicated by two outputs: a pygame window, and a console output similar to below, where the pygame version may differ:

Here, None represents no flap while 119 is a code for do flap.

Then, we initialize the learning agent using an XCS-RC instance.

Using a one-liner like agent = xcs_rc.Agent(maxpopsize=200, ...) is also possible, depending on anyone's preference.

The current states of the screen can be obtained with the function getScreenRGB().

The window size for the Flappy Bird game is 288x512 pixels, making an overall of 442386 values, all within the range [0..255]. Further processes will be provided below.
Observe and Act
A reinforcement cycle consists of three parts: observe, act, and get reward. In some occasions, the third part is performed together with the first. For instance, when the reward is determined by comparing the current state and the previous one.

This is how we get the game states the easy way. The variable pipe_y is added with 50 as the gap between a pair of pipes is 100 pixels.

And, the observation part is actually done. The values of these states will be fed to the bird, as it should make decisions to execute do flap or do not flap.

Now let's get the bird's action by feeding the states to the learning system, and then execute the action to the environment. The variable state is a list consisting of three values:

I have tested to make the bird learning only with the first two values, but the result was not quite satisfying. A small number of states is decisive for reaching an optimal learning speed. And, since three is not that much, I think we're good to go. 😎

Well, it is actually optional, and the idea is to store the middle value of the bird's height, which is 24. So, we do not use the top position of the image, but the middle instead.

And now, let's get to the action, and execute it.

Want to see what some lines of codes can give?
You got it. This is the du... not learning version of our Flappy Bird. 😁

And here's the result:

Why does it keep hitting the top?

Because the chance of do flap and no flap is equal at 50:50. However, the difference is, once it choses do flap, performing no flap would give no effect for the next 8 ticks, since it will still go up anyway. On the other hand, picking do flap make the flappy bird even closer to hit the ceiling.

Composing the reward map is commonly quite difficult, but also a very important part in the whole Reinforcement Learning, especially when facing dynamic environments. For this one, we will do it as simple as possible, but yet providing an outstanding result.

So, the feedback for each action would be determined by two factors:

These values is calculated using a set of formulas described in the following code:

The first formula is pretty straightforward: set the full reward value if y is greater than or equal to nine, with a maximum at 35. The idea of these values is to keep the bird at the lower half of the pipe gaps, as often as possible. By doing that, we minimize the risk of hitting the upper pipe when flapping. The second and third formula have something to do with the diff variable:

And that's it! Based on only these lines for determining the reward, the flappy bird will be able to learn flapping through thousands of pair of pipes. At the video, it's only around 1200 points max. After some algorithmic improvements, more than 10000 pair of pipes can be solved, still under 100 episodes.

However, very important, never forget to assign the reward and update the executed rules with a single line of code...

Now, if you are looking for a simple way to beat flappy bird, it is done. But as I said, using the provided internal states is too easy. Image processing would be the next challenge. And to keep it simple, no learning algorithms will be used for that. Just a bunch of simple math.

Keep checking this page out, they might be here sooner than you thought. 😉
Result!