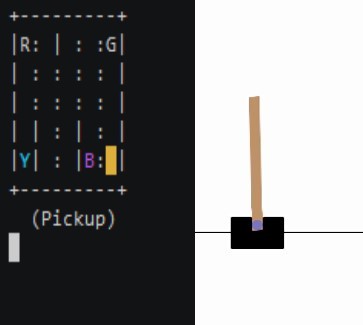 In Reinforcement Learning (RL), OpenAI Gym is known as one of the standards for comparing algorithms. Therefore, this page is dedicated solely to address them by solving the cases one by one. Starting from the Cart-Pole environment representing a simple control theory case, and then Taxi which is an instance of a hierarchical learning.

We will go even further to see how other available scenarios can be solved using XCS-RC. All codes will be presented as simple as possible, without reducing the important factors.

XCS-RC
A rule-based RL system that collects its knowledge by making conclusions from its experience. In case you haven't, simply use pip install xcs-rc or via github to get the required library.

I remember the first time studying this inverted pendulum problem at my bachelor study, which is very unsurprising because I came from the Control Engineering background. CartPole has a similar characteristics, and what we need as a start is a set of environmental states.

Observation
Getting the states is quite simple, since the Cart-Pole (as well as other scenarios in Gym) is already equipped with such a feature. Since XCS does not require all of them, the variable xcs_input is created for that purpose. See corresponding notes on the right column for some detailed explanations.

Executing Action
The learning system returns the variable action as a response for the given state. Now we will drive the cart to act accordingly.
The value of state has a similar structure to that returned by env.reset() above. Other than that, we will only use done, which indicates an end of the current episode.
Reward
Our reward map is determined by two factors: Of course, there are many ways to improve the reward calculation, like taking the cart's momentum into account. However, here we want to make it simple, and XCS can still learn well.
Termination
An episode ends when one these factors occurs: end of loop, or done == True.

Yes, basically that is it. The cart will learn to keep the pole in a straight-up position using RL. Of course, one episode is insufficient. For a complete version quite similar to this one, you can check out my github page. It's way easier than you thought! 😉
Before performing any learning, XCS-RC and the environment have to be initialized. This is how we do it.

An environmental state is a list (array) consisting of four elements:

From those, XCS only uses Cart: velocity and Pole: angle to solve the problem.

This function finds all rules in the population of knowledge that match state and returns the selected action using a method determined by the second parameter. The available options are:

Carelessly using the term reward in CartPole environment might cause a small confusion. Why? Because there are two kinds of rewards: from the environment to the agent, and from the agent to the rule. They are two entirely separate instances. To prevent that, I will consistently use the word feedback for the former and reward for the latter.

This is already available at youtube for everyone to watch! Have a nice balance! 😎

Now we tackle a problem involving a hierarchical RL, or in XCS, it is called multistep. As the title suggests, an agent should pick-up a passenger at a certain point and then do a drop-off at another. In this environment, four locations are available for picking up and dropping off.

The "world" has 25 coordinates available, along with six possible actions for directions and passenger-related (SNEW/PD). An environmental state consists of [taxi_row, taxi_col, passenger_location, destination] with 5 x 5 x 5 x 4 = 500 possibilities. Put together the actions, we get 3000 available pairs of state-action.

Observation
Different from CartPole, composing an input structure in Taxi quite takes some time (actually not that long, I solved this case in less than a workday in total). The trick is to set the number of elements as small as possible, while still represents the whole problem. Before doing anything, don't forget to initialize.
What can we conclude from the code?

What is that special state? That is a trick to make XCS learn quicker. By giving a pair of negatives in taxi's coordinate, XCS can quickly get the idea that now is the correct place to pick-up or drop-off the passenger. 😉

Afterwards, we take and decode the first observation, and start the episode.

Executing Action
Different from Cart-Pole that allows us to apply a straight-forward action and reward, here comes the tricky part of multistep learning. It is called delayed reward, and it is very effective. Basically it says, "if the agent has not reach the target, give a discounted reward out of the highest possible afterwards". Corresponding note on the right column might help. 🙂
A small number of lines is reserved for the delayed reward. For now, let's just focus on the conventional steps: get matching rules, pick a winning action and collect corresponding rules.
The value of state has a similar structure to that returned by env.reset() above. Other than that, we will only use done, which indicates a successful drop-off.
Reward
Due to its nature of learning mode, Taxi employs two types of reward function:

This is how we judge the normal reward.

The code basically tells us, a maximal reward is obtained when the passenger is picked-up or droped-off properly. Contrary to that, the lowest gain is awarded when no progress occurred, inidicated by an unchanged state (e.g., caused by hitting a wall).

And, what about the delayed reward?
Simply put this code to the corresponding comment before building action set, and it's done.
If no normal reward given, then assign a delayed one. To fully understand these tricks, you probably need to learn XCS-RC algorithm. Some notes on the right column here might help a little, but we'll see. For now, I suppose there is only one thing left to make the code up and running:
Termination
An episode ends when one these factors occurs: end of loop (giving up), or done == True.


Gets a little tough?

Don't worry about it. A little reading and some coding exercise would make you understand better and able to improve the algorithms. Remember to make the agent learns hundreds of episodes or more, instead of only one like the example here. Then, it might become a smarter taxi learner! 😎
Before performing any learning, XCS-RC and the environment have to be initialized. Here, the locations of passenger and target is also initialized.

An environmental state here consists of only a number in [0..499] and therefore should be decoded using env.decode(state). The result is an array of four elements:

The passenger has four possible location [0..3]. Once entering the taxi, the value will be 4.

This function finds all rules in the population of knowledge that match state and returns the selected action using a method determined by the second parameter. The available options are:

It is a common technique in RL to guide a learning agent performing a set of expected steps. For instance, if reaching finish gets a maximal reward at 100.0, then moving into one cell away from finish would be rewarded with agent.gamma x 100.0 which in this case is 80.0. Calculations for other cells are similar to that, as depicted below. 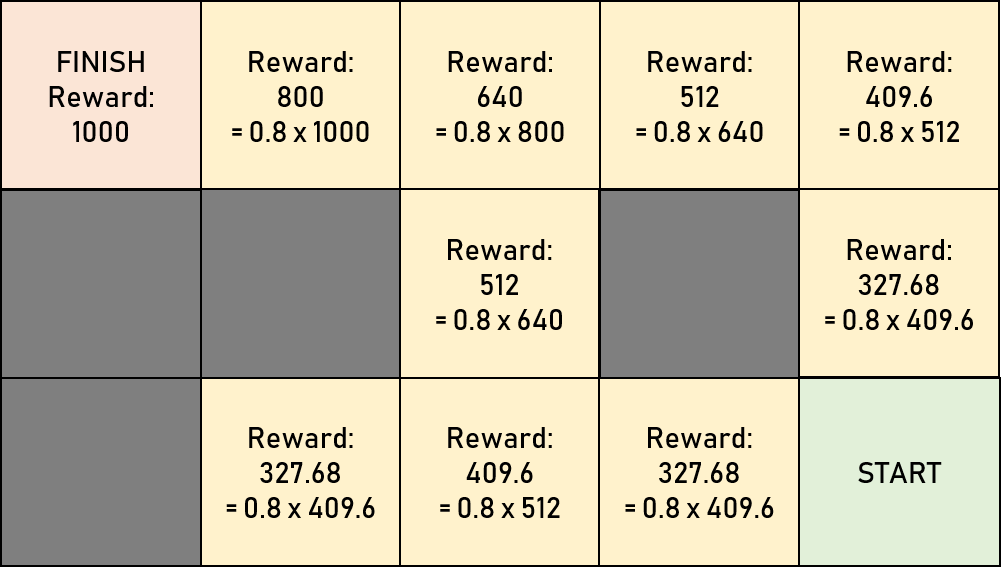 In other words, the current reward is assigned after calculating the highest next reward possible for the new cell, discounted by agent.gamma.

So, since the provided display is a text world instead of graphics, it might be a little unworthy to record a video. Instead, this figure of #inefficient_steps might give you an impression of how the taxi behaves. 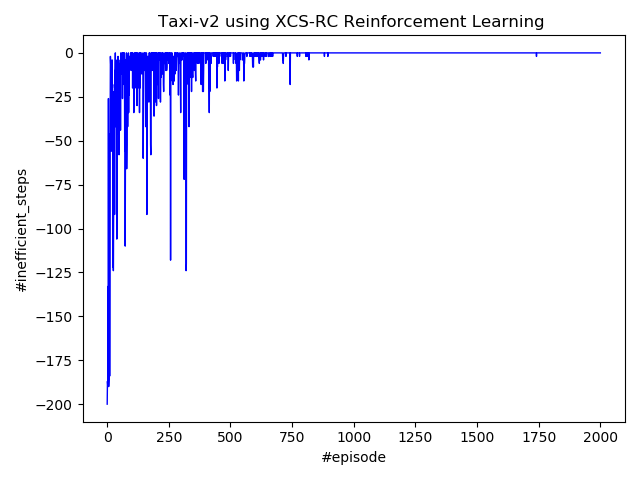